What does it mean to be a feminist? Feminists acknowledge that women should have the same opportunities, rights and freedoms men have, fight against sexism and gender discrimination, believe we can change the status quo and create new culture because the equality of sexes is possible, so — you must react!

In this essay Chimamanda offers a most inclusive definition of feminism. Drawing on anecdotes from her adolescence and adult life, she attempts to strike down stereotypes and unpack the baggage usually associated with the term. A short adaptation of a TED talk, it’s a great introduction into the topic of feminism and gives a brief insight into how sexism can go unnoticed in society.

I love the eloquent way this essay is worded: its arguments are persuasive but don’t put pressure on you into agreeing with her. It’s unnecessary because her story speaks for itself. She discusses how women are treated as second-class citizens and suggests new ways of socialization for both girls and boys. The example from her childhood at school in Nigeria is perhaps the most poignant, demostrating how insidious gender is and how damaging it is to the tender psyches of young people. The primary teacher enforced an arbitrary rule (she assumed it was obvious) that the class monitor had to be a boy even though a girl had earned the privilege by winning the highest grade in the class.

I higly recommend the book for its images flew in my mind and brought me a powerful experience about how a black feminist woman in Africa feels and thinks.

About the Author – About 100 words

Chimamanda Ngozi Adichie was born in Enugu, Nigeria on September 15, 1977. She studied medicine and pharmacy at the University of Nigeria for a year and a half moving to the United States, where she studied communication at Drexel University for two years.

Her first novel, Purple Hibiscus was published in 2003 and received the Commonwealth Writer´s Prize for Best First Book in 2005. Her other books include the collection of stories The Thing around Your Neck and the essay We Should All Be Feminists. Her novel Half of a Yellow Sun won the Orange Prize in 2007.

In this essay Ngozi addresses about the concept of feminism from a very natural point of view and based on her experience. Her aim, to make the case for everybody becoming a feminist even in our present society.

Personally, I love the part when she says ¨I decided I would now be a Happy African Feminist Who Does Not Hate Men and Who Likes To Wear Lip Gloss and High Heels For Herself and Not For Men¨ because it is really true that being a feminist is often considered as negative by many uninformed people and that creates, like she explains, ¨negative baggage¨. She leaves aside this negative baggage and emphasizes the way feminism is about equality between both sexes.

As a future mother, I keep thinking about how I am going to raise my children and I feel fear when I see how our society raises children differently: boys have the pressure of proving their masculinity and girls have to be more flexible, beautiful and patient. I can’t agree more with Ngozi about how these stupid expectations hurt both boys and girls.

This essay is a great introduction into the topic of feminism apart from that the fact it is a small, thin book, easy to read and sometimes very funny. I highly recommend it to teenagers and men in general because I think that women are more aware of gender problems in today´s society. In any case, this essay could be interesting for any reader because it does make you think. Just consider these quotes about important issues: ¨Culture does not make people. People make culture¨ or ¨Feminist: a person who believes in the social, political, and economic equality of the sexes¨.

I hope one day Feminism will have no reason to be.

We Should All Be Feminists is an excellent essay about feminism in which the author, Chimamanda Ngozi, describes what it means to be a feminist and shares anecdotes about the sexism that exists in Nigerian patriarchal society.

Firstly, I’d like to mention this book has been very interesting because I’ve learned a lot about feminism and how gender is a grave injustice in our world. In fact, now I feel it is incredible the image that society has of feminist women: they are unhappy because they cannot find a husband, they hate men, they don’t wear make-up, they are always angry, they don’t have a sense of humour, etc.

The book is full of big moments, as when she recognizes that society teaches that men are more important than women, or when we teach girls to make themselves smaller, telling them: “You can have ambition, but not too much, you should aim to be successful, but not too successful”. The consequence of this is clear: most positions of power and prestige are occupied by men, and the hardest thing to understand is why if both of them do the same job with the same qualification, a man is paid more because he is a man.

I highly recommend this book because you can learn a lot about feminist viewpoints. Also, readers will have a difficult time putting this masterpiece down since they will enjoy with the story and the anecdotes that she narrates throughout the book. 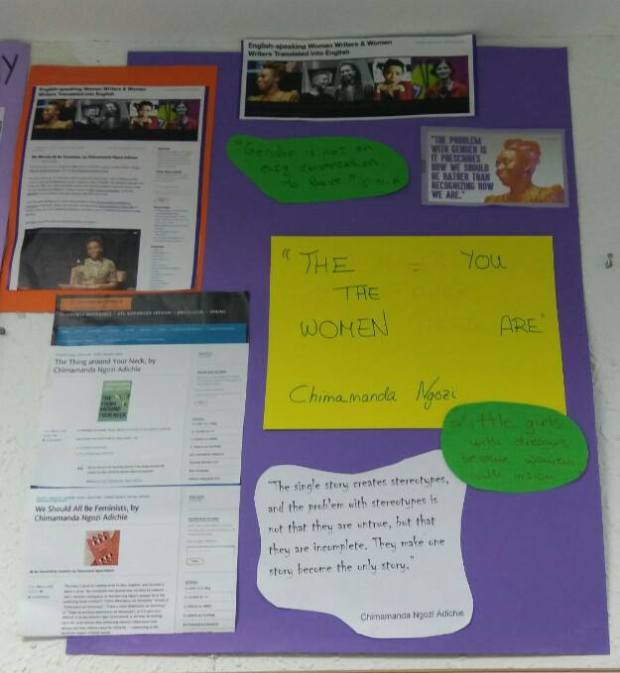